iOS devices are used by us daily. We use them for installing different applications and games. These apps and games are available in .iPA extension. When we execute these iPA files in Cydia Impactor or iFunBox, the apps and games get installed in our iOS devices. While doing these things, one question arises in minds of many people. The question is that, “What is .iPA file in iOS?” 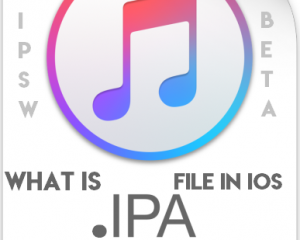 The files with .iPA extensions are application files for iOS devices. Just like there are .Zip files for PCs which hold compressed games, in the same way, .iPA files are also compressed files which hold games and applications of iOS devices. .iPA files previously stood for iPhone Archive, due to iPhone being the only iOS device. After release of other iOS devices like iPad, and iPod. The abbreviation of .iPA files changed to iOS App Store Package. Now, these special extension files are supported by all the iDevices released till now, let it be iPhones, iPads, or iPods.

Now let’s talk about the structure of these files. Every .iPA file is based on the same structure. When a common .iPA file is extracted, it gives us following files and folders

How to open .iPA files?

Now, there stands another question that “How to open .iPA files?” Let us directly answer this question.

This fixed location helps the iOS devices easily access these files, when they are connected with PC again. Now, we know that where these .iPA files are stored and we can access them, but we cannot open or execute them. For opening these files, there are two programs available. These programs are Cydia Impactor and iFunBox. Both of these programs are free to use and are available for both Windows and Mac platforms. These programs let us transfer our ringtones, music, videos, and photos. These .iPA files can be installed on an iOS device by using the Managing App Data tab, found in these programs.

We hope that you all have no more confusion related to .iPA files. In this article, we told you all about, “What Is .iPA File In iOS?” and “How To Open .iPA Files?”

View all posts by Saad Wakeel →